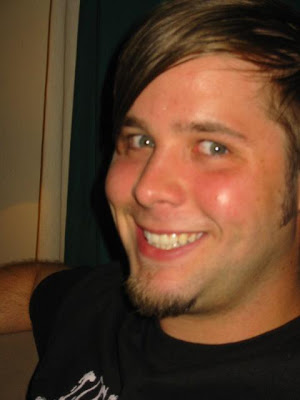 Friend profile: Luke Martin.
Luke, always on the go! He's one hard work'n fella that hails from none other than Ottawa Canada.
You might have had a chance to catch him swinging from the rafters of your local watering hole with his band the Million Dollar Marxists or perhaps caught him knocking around his bass with other band White Wires. I've known Luke for many years now. We met back when I used to do my fanzine "Dirty".
Luke along with Trevor was my most reliable contributor. I had to pull every ones teeth just to get them to contribute but not Luke and Trevor for that matter.

Favorite monster: Gary Glitter.
Why? Because he's a rock and roll space pedophile. What if all his songs are about having sex with children. That's fucked up. But man, that beat! Runner Up: D Compose of Inhumanoids.
What do you hate? I hate photocopy store people and music store workers. Two places where employees have a grossly disproportionate ratio of arrogance to genuine power . Somehow, they manage to ruin my mood several times a week. Hey asshole, don't look at me like I'm from Neptune because I'm looking for a speakon to 1/4" adaptor. They do exist. I own several. SO fuck you, fuck yer shitty, wanna-be Theory Of A Dead Man band and fuck yer two foot long goattie with it's frosted tip. You are like diarrhea incarnate.
What do you love? I love that I live in a time where you are basically free to discover and explore any available history, visual art, sound, idea and technology recorded in human civilization.
Why? Because dispite this fact, people are more interested in Amy Winehouse's vigina than who is stealing all their money and shit. Pure comedy!

For more about Luke check his website capitalrehearsal.ca/
Posted by Dirty Donny at 10:11 AM