My pal Eric Davidson's new book is out June 1st. 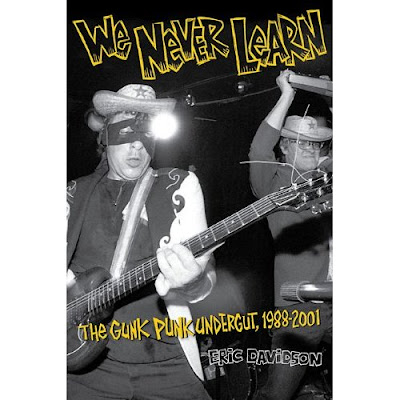 Nirvana, the White Stripes, Hole, the Hives - all sprang from an underground music scene where similarly raw bands, enjoying various degrees of success and hard luck, played for throngs of fans in venues ranging from dive bars to massive festivals, but were mostly ignored by a music industry focused on mega-bands and shiny pop stars. We Never Learn: The Gunk Punk Undergut, 1988-2001 tracks the inspiration and beautiful destruction of this largely undocumented movement, the last generation of punks and rockers to conquer city after city without the diluting force of the Internet. What they took, they fought for, every night. They reveled in '50s rock 'n' roll and '60s garage rock as much as Iggy Pop, the Ramones, and Black Flag, while creating their own wave of gut-busting riffs and rhythm. The majority of bands that populate this book - the Dwarves, the Gories, the Supersuckers, the Mummies, Rocket from the Crypt, Jon Spencer Blues Explosion, the Muffs, and the Donnas among them - gained little long-term reward from their nonstop touring and brain-slapping records. What they did have was free liquor, good drugs, guilt-free sex, and a crazy good time, all the while building a dedicated fan base that extends across America, Europe, and Japan. Truly, this is the last great wave of down-and-dirty rock 'n' roll, one whose hangover can still be felt in bars and clubs everywhere in the world.
Pre-order it here!
Posted by Dirty Donny at 10:23 AM