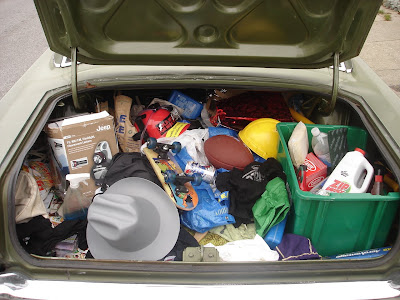 This is my friend Sudsy's trunk AKA Jamin, aka Uncle Suds.
This is the infamous '68 Dodge Dart "Sean Pens Dart" from the film The Assassination of Richard Nixon.
Don't ask him where he got it but he got it.
And well, this is his trunk...full of Sudsy's junk.
If you know Jamin you know he's a man that comes well prepared, and usually late.
He parks the SPD at my house from time to time so I figured It was my perfect chance to get a shot of his trunk, cause it's pretty fucking funny whether you know him or not.
There was piles of stuff underneath this I left undisturbed, I think there is a parachute and I saw some weird knife axe thing, probably a gun or two, I didn't really dig around to much.
SPD trunk contents clockwise from left to right:
plastic cowboy hat (yikes!)
Windex ( you never know when you'll need it)
One of my T shirts I gave him a year ago.
TV/AM/FM Flashlight Lantern (Still in box)
Paper bag of random items
Beer hat hard helmet (again, you never know when you'll need it!)
Mini novelty skateboard
Rusty greasy PBR beer can (still full)
Greasy football (Was greasy on the other side)
X mass gift bag with unopened Xmas items
Yellow hard hat
500 club T shirt
bin of car shit
Crown Royal bag, empty
Posted by Dirty Donny at 8:59 PM