Villain of the week "Calibus" 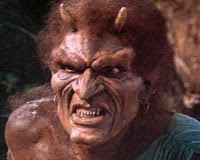 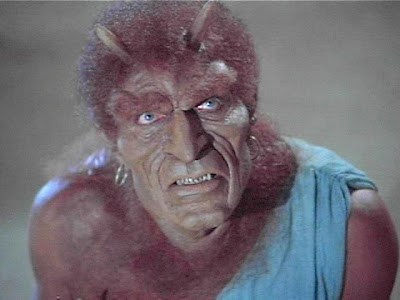 You might think it's easy to pic a "Villain of the week" but it's not, it's hard! I mean these are well though out, these villains are bad ass! This week's villain is our good pal Calibus from a little 80's flick Clash of the Titans, which by the way is overflowing with bad guys.
Calibus is hip in the swamp he rules. He rocks the fro-mullet and he rocks it well.
It's not easy being and 80's villain these days, he's got to deal with the growing threat of gang violence, extortion and getting your trees tagged. The swamp just isn't the same old swamp any more, times are changing and with them old Calibus keeps his pimp hand strong!
Did I mention he's got some cool horns and a bad ass gold ring? (I don't think it's a magic ring Oriana, but we can pretend). Legend has it he used to be good but got caught doing some bad shit, so Zeus was like "Fuck you dude, go live in the swamp and drink stale lake water" That's why he looks so bad, from the lake water. Must be murder on your liver.
He looses his hand in Clash of the Titans, but that's just a movie, I don't think it happened in real life.
Posted by Dirty Donny at 6:22 PM